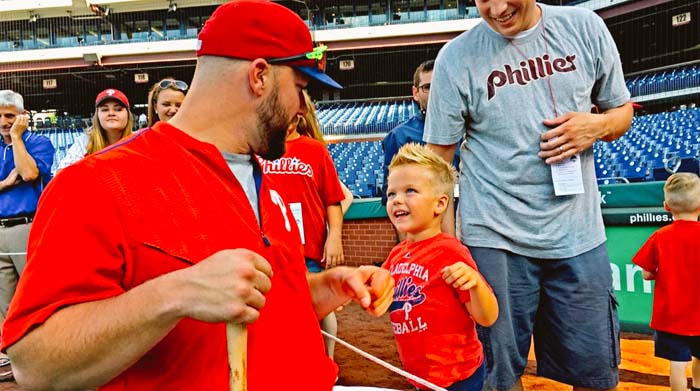 “Kids make us better. That’s why we do everything within our means to make kids better.” This is the heart and soul behind Shriners Hospitals, whose mission is to “provide the highest quality care to children with neuromusculoskeletal conditions, burn injuries and other special healthcare needs within a compassionate, family-centered and collaborative care environment”. (www.shrinershospitalsforchildren.org)

The T.Cares Program stands firmly behind the Shriner’s mission and we’re honored to help create memorable experiences for their warriors, just like how we were able to surprise Caiden with a fun-filled afternoon with the Phillies.

After overcoming the rare disorder he was born with, Caiden was given the memory of a lifetime (as you can see through his smiling face in the photos). But truly, it was his strength and determination that encouraged us all.

It was through our T.Cares program that we were able to partner with Shriners Hospitals and the Phillies to host five year old Caiden, his brothers Michael and Brandon, and their parents Katie and Mike to a VIP meet and greet at the Philadelphia Phillies game on August 18 at Citizens Bank Park. They were able to meet many of the players including Catcher, Cameron Rupp who later shared via his Twitter: “Definitely made a memory of a lifetime yesterday!! Caiden you are the man!”.

Caiden and his family have an incredible and inspiring story, which is why we were honored when Caiden’s mom spoke to our Tickets.com family about their journey.

Caiden was born with Amniotic Band Syndrome (ABS) and Ectrodactyly. ABS occurs when the fetus becomes entangled in string-like bands, it occurs randomly. In Caiden’s case it completely amputated his right leg at the knee. Ectrodactyly- Split hand/foot malformation is a rare form of a congenital disorder in which the development of the hand/foot is disturbed. Caidens right hand and left foot were affected.

This syndrome was discovered early on in the pregnancy, at my 11th week ultrasound. The doctor asked if we had family history of Dwarfism, I told him “no”, he then went on to say that it didn’t look like the baby had any legs. 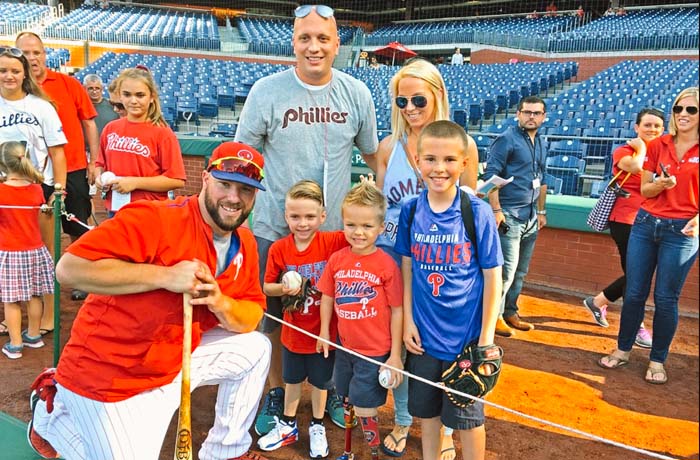 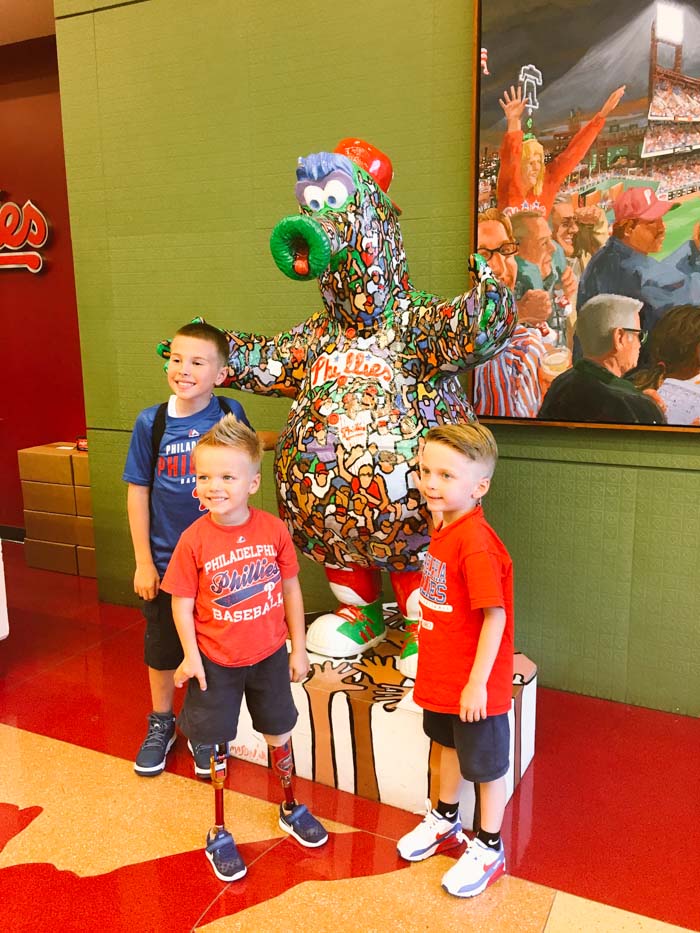 Mike’s unit was set to deploy to Iraq in a couple weeks, I was prepared to be a pregnant single mom for the next year, but to now have a complicated high risk pregnancy on top of it was a little scary! Luckily, his unit allowed him to stay back (Rear Detachment).

I had so many appointments that I lost count, and with each appointment it seemed like we got more bad news, at one point they weren’t sure if he had any legs or hands. Finally at my 20 week scan when we found out we were having a boy they saw that he had 2 hands, one was “normal” the other had a couple digits, and that he did have a foot!  I’m grateful that we found out early, because it gave us time to educate ourselves and prepare for what we could do. We had 2 little kids at home as well, (Michael was 3 and Brandon just turned 1). We took every opportunity we got to explain to the boys about their brother.

As a mom your job is to protect your kids so I was going to do whatever I had to do to make sure all 3 of my boys were okay!

The only thing that I would consider a challenge was the fear of the unknown! Google could only answer so many of our questions! Even with high tech ultrasounds we weren’t going to 100% know what we were dealing with until he was born. When a child is born with bone deformities there is always the chance that there could be other issues, so wondering if his heart would be ok, or if he was going to be deaf or blind or if there were any other internal problems that an ultrasound wouldn’t be able to tell us was scary. So instead of driving myself crazy over things that were completely out of my control, I took it one day at a time. I had to have faith that I could handle whatever was going to be thrown at me. It’s kind of funny to think about how much we worried because if we would have known then what we know now we would not have anything to worry about!!

Shriners saw Caiden for the first time when he was 6 weeks old and from that moment we were part of a family, a family that I didn’t necessarily plan to be a part of but one that I am thankful for everyday. I remember our first appointment and Doctor Kozin looked at Caidens foot and said, I want those toes, they will make beautiful fingers. I’m sure I probably looked at him like he was crazy! But at the same time I knew we were in the right place and that Caiden was in the best hands!

Day in the Life

A typical day in the life of Caiden is just like any other 5 year old. He just started Kindergarten this year so he spends his days at school, he gets to ride a bus so that’s a big deal to him!

He loves WWE, any chance he gets to play with his wrestlers or wrestle his brothers he takes it. He took a break from fall sports this year, running is a challenge for him so until he gets running legs we will have to find other things for him to do. He does attend a motor development class at the Kennedy Krieger Institute that will start up again next week, there they work on all kinds of skills. They teach him wheelchair basketball, tennis, baseball and swimming. He started wrestling last year and that will begin again in the winter. He loves to play outside…..baseball, soccer, riding his scooter. He loves swimming, he would spend all day in a pool if he could!

Shriners means everything to us! Without them, I honestly do not know how things would have turned out for Caiden. As a single income Military family, I don’t know how we would have been able to afford all of the things that Shriners has done for us! They have done everything – prosthetics, equipment, surgeries and therapy…… all without asking us for anything!

Caiden just thought we were going to a game. He had no idea that he was going to get VIP treatment! He won’t really describe the experience for me…… however, when asked what his favorite part was he said ” When they won, duh!” He also ranked his dance off with the Phillie Phanatic and being allowed to have two water ices a close 2nd!!! 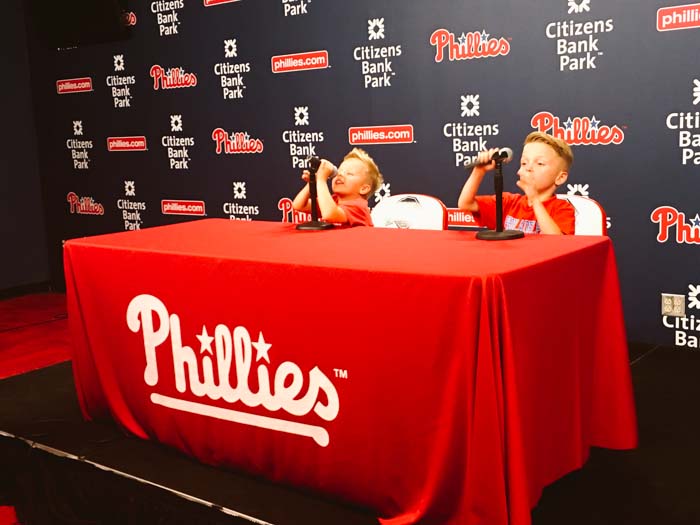 The T.Cares program gave Caiden and our family a once in a lifetime opportunity! Without the program we would have never met the Phillies players or been able to go onto the field for batting practice. We are just a regular family that was given the chance to be treated like VIP for the night and that was pretty awesome! All of us had an amazing time, especially my 3 boys!

As for what’s next, I have no idea! We are in for some major changes this year as Mike is getting Medically Discharged from the Army, so we will be moving and changing from the military world to the civilian world! Trying to decide where we want to live and finally put down our roots after moving every 3 years is a big deal and at the top of our list! But I also want to grow Caidens Celtic Warriors and do more fundraising on behalf of Shriners and Camp No Limits.

On behalf of our Tickets.com family, we thank Katie and her family for being a voice for children everywhere who have a similar story to Caiden and for including us in their journey. Today, Caiden is cared for by Scott Kozin, MD, and Corinna Franklin, MD, at the Philadelphia Shriners Hospital. Caiden’s newest prosthetics include Ironman and Phillies logos!

With 22 locations around the U.S. Shriners Hospitals are constantly providing for the education of physicians and other healthcare professionals and conducting research to discover new knowledge that improves the quality of care and quality of life of children and families.

Learn more how to get involved in serving your community with our T.Cares program on ProVenue.Tickets.com #ExperienceIsEverything