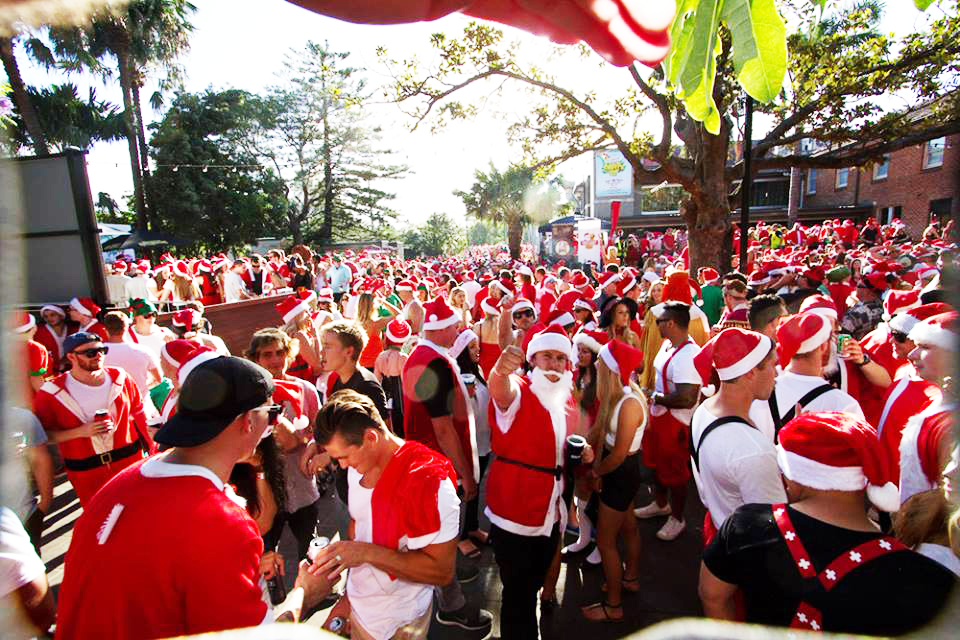 Wollongong’s Santa Claus Pub Crawl is in its 23rd year, and fittingly, took over 23 venues in the city for an epic Christmas-themed jaunt on Saturday the 10th of December. Funds raised from wristband sales, raffle draws and donations go toward the Salvation Army for projects in the Illawarra area, south of Sydney and the Disabled Surfers Association South Coast Branch. The event raised over $100,000 for these charities and was attended by around ten thousand people all dressed in costume, as Santa, Mrs. Claus and other holiday themed attire.

The event is recognized as “the longest continually run Santa Pub Crawl in the world”, and they proudly claim to have never had a major violent incident in the pub crawl’s history. Founder Neil Webster has a personal interest in this statistic – the event started 23 years ago, but it was in 1997 when Webster himself was the victim of a serious alcohol-related bashing on Christmas Eve in 1997. He said he then rejigged the Santa pub crawl to help promote a positive, safe culture around nightlife, and claimed there had never been a major violent incident in the pub crawl’s two-decade history.

Webster added that having everyone dressed in silly costumes probably helps this safety record. “It’s hard to get into a punch-up when you’ve got 5000 Santas standing behind you,” he laughed. “Everyone is like part of the same team, it shines through. It breaks down a lot of social norms. Normally you go to a pub, you usually don’t talk to people in other groups, but here, everyone is your friend because you’re all here for the same cause. You have little discussions about costumes.”

“Those barriers of talking to a stranger are out the window. Everyone is your friend. We’ve lost count of the number of people who met at the pub crawl and are now together or married. It’s those barriers breaking down.”

Tickets.com has supported the event since 2010 and provides event management advice and ticketing services.