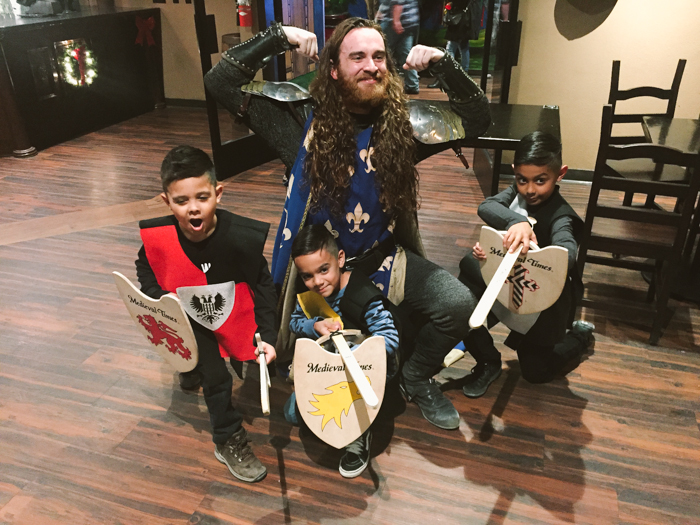 The T.Cares program, embedded into the culture of our company, is dedicated to making meaningful impacts on communities worldwide by working with nonprofits, like the Young and Brave Foundation, by creating extraordinary experiences at live entertainment events for individuals and families facing hardships.

No matter how strong of a person you may be, there’s nothing that can fully prepare you for cancer. However, there is the strength and support of others surrounding you that can make you feel like you can take on any challenge that comes your way. Over three years ago, Eli was diagnosed with cancer at the young age of two. He was diagnosed with B Cell Acute Lymphoblastic Leukemia after dealing with erratic fevers for about a month, excessive bruising and finally difficulty breathing and extreme fatigue.  He endured 3 ½ years of chemotherapy and was declared cured in July of 2016.

Though Eli and his family have been enduring one of the most difficult experiences of their lives, The Young and Brave, a foundation that is rooted in and dedicated to love, have been an indelible life-changing support to Eli and his family. What’s even more exciting, they opened the opportunity for the Tickets.com team to be a part of it as well. 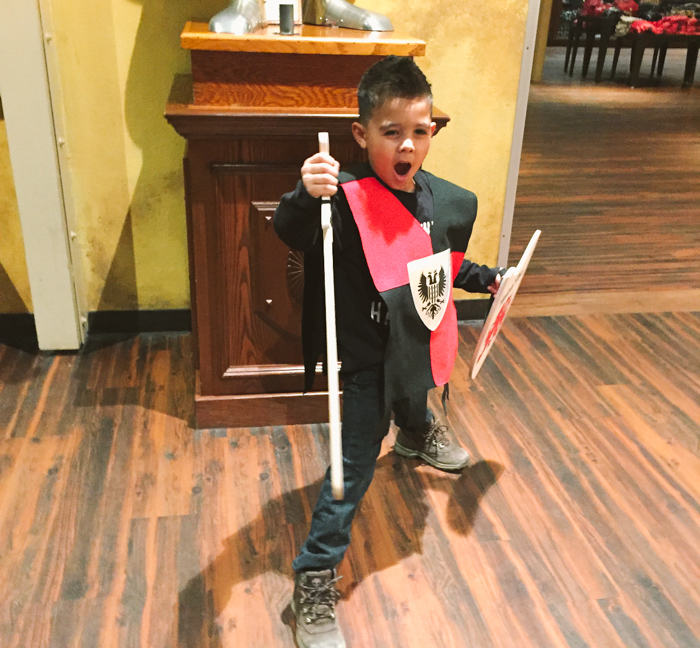 The Experience
T.Cares partnered with The Young and Brave Foundation to bring Eli and his family a different kind of experience at Medieval Times.

According to Eli’s family:
“Since his treatment, his immune system is pretty low. He tends to get sick easy and has a hard time fighting off any kind of bugs or viruses. We don’t like to make plans or tell them about anything exciting until the day of or before to prevent heartaches. It was a total surprise for him and his brothers and it made it so much more special of a day.

We arrived at Medieval Times early before the show and met some amazing people. We were informed that they were going to be treated to a special experience and that was an understatement. The staff was so nice and made us feel right at home. The boys were given a tour of the castle and got to meet “real live knights”. They were able to come down into the arena where they were given some beneficial fighting tips, they loved that of course (I mean, what brothers don’t like to swing swords at each other?) and got to see, touch and hold real weapons used during the tournament. They were also given the honor of choosing their colors and received matching shields and swords.

Eli chose the red knight, Andrew the yellow and Daniel the Black and white knight. Eli, we have called “our little lion” since the beginning of treatment because that kid was so brave! He never fussed or fought any of the Doctors or Nurses, not even when getting poked for labs or chemo. We had no idea, but the red knight’s symbol is a lion, so perfect! They cheered on their knights from the stands and at the end of the night, the red knight won! Eli was so happy! After the show, the knights greeted the guests and took pictures with the kids. Eli saw his red knight and ran into his arms yelling, “We won!” The red knight didn’t have to match his reaction and he went out of his way to do so… It literally made ours and Eli’s night!  All of the knights were so kind and willing to play along with our three rambunctious boys. It meant so much! We are so blessed to be loved by The Young and Brave Foundation. Thank you so much for an unforgettable experience you are some very loving and wonderful people!” 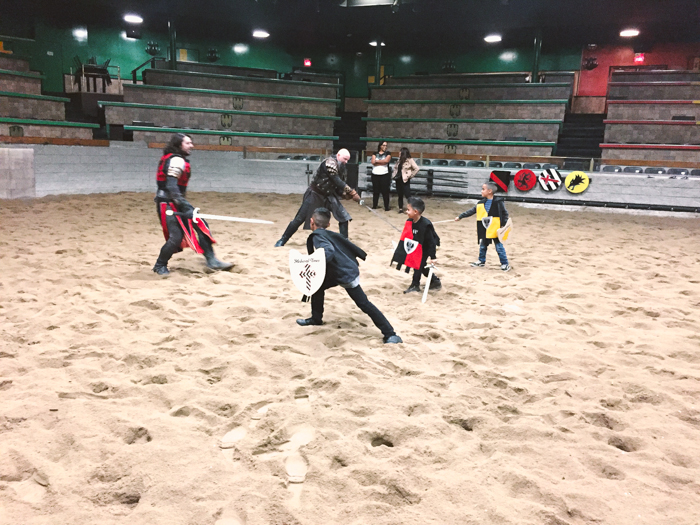 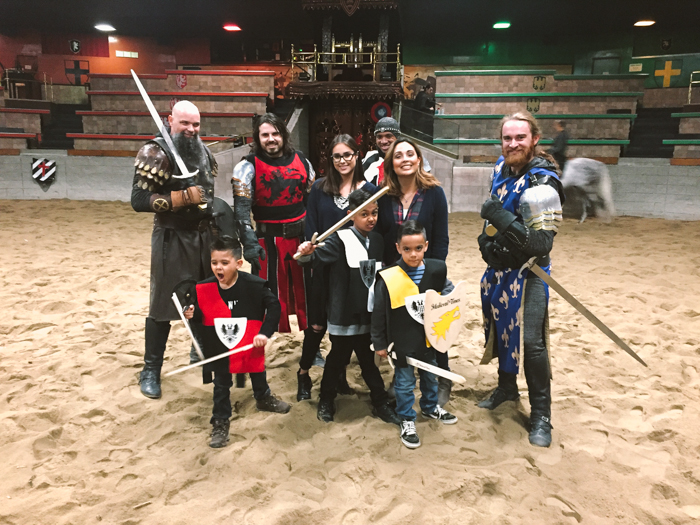 At Tickets.com, we believe that experience is everything, especially one that is full of excitement, and nothing makes our team more complete than knowing that we were able to provide someone with an experience that they will never forget.

Not only was the night of jousting enjoyable to Eli and his family, but it was a night to remember for all of us. Ed Gow, Vice President of Client Engagement at Tickets.com said: “I had the pleasure of spending the evening with Eli and his family as he and his older brothers Daniel and Andrew received a behind the scenes look at Medieval Times.  It was heartwarming to watch the three of them receive one-on-one battle training from the Knights on the floor of the arena and their awe as they saw the sparks fly (literally) up close.  We had a chance to meet the beautiful Spanish horses and were treated to a great dinner served Medieval Times style.” 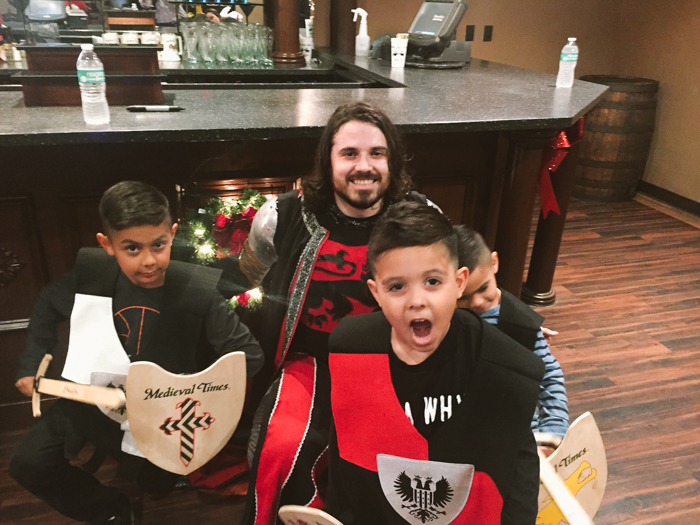 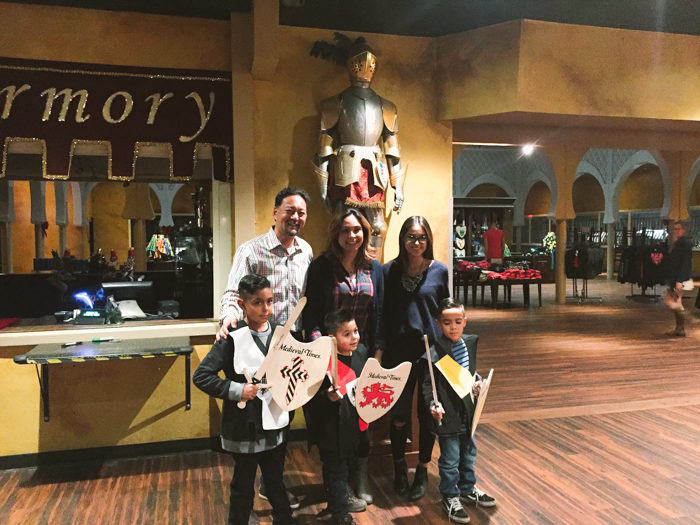 We can’t wait to be part of the next experience!

More About Medieval Times
Medieval Times Dinner and Tournament is an interactive dinner theater for all ages. Housed inside an 11th-century castle replica, the experience features medieval style games, sword fighting, jousting, and horsemanship. Medieval Times holds approximately 4,000 shows across nine venues nationwide throughout the year and has served over 60 million guests since 1983. The action-packed live show makes each Medieval Times experience unique and exciting. Guests are encouraged to participate by dressing up in medieval wear, cheering for their favorite knights, and booing the villains.