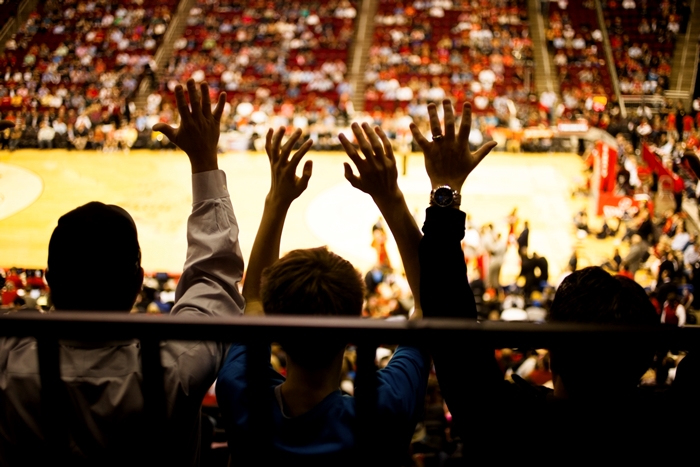 As the NBA playoffs heat up, the team at Tickets.com can’t help but debate the classic argument: NBA or college basketball, or better yet, NBA Playoffs or March Madness?  It’s the same sport, played very differently. Whichever you prefer, it’s hard to debate that one is better than the other however in the spirit of high intensity basketball playoffs; for fun, let’s compare.

Making a college basketball team is the pivotal point in a young player’s career allowing them to take what they’ve learned during countless games played in rec and travel leagues, and improve upon their skills.  It is also the place where legends are born, stars shine in high pressure situations and players show what they are made of. During March Madness raw emotion is on display for fans, players and coaches.  A win in the tournament advances your team to the next round and when you’re following your team through the brackets it feels like a personal victory when your bracket soars! The thrill of March Madness is that at any point your team can be eliminated or thrive against all odds creating an instant “Must See” event.

The game NBA players play is a very different game with best in class talent and a maturity that only comes from being the star or player under pressure over and over again.  Each player on an NBA roster was the best player on their college (or in some instances high school) teams.  They get paid to play night after night and to bring home a championship.  The NBA also drafts international players which help the league draw fans from all over, including celebrities and other high profile people who clamor for courtside seats and a chance to be part of the action. In many cities NBA basketball is an obsession.

From the fans perspective both games are evenly matched and you’d be hard pressed to convince a die-hard Knicks fan that watching the local college basketball team would be the same or vice versa; so let’s talk numbers.

College hoops start in the fall and hits its frenzied climax with March Madness where 68 teams battle it out during a single-elimination tournament played out over 30+ games.  Brackets are busted, Cinderella stories emerge and likely and unlikely heroes have the opportunity to show their grit in front of a global audience.  In 2013, the NCAA Tournament averaged 10.7 million viewers per game.  The Championship Game – Louisville Cardinals vs. Michigan Wolverines pulled in 23.4 million viewers. [Source: CBS Corp.]

The NBA Playoffs on the other hand is a four-part, best-of-seven elimination tournament among 16 teams between the Eastern and Western Conferences, ultimately deciding the final four teams who will play in the conference finals.  Battling it out the last two teams standing play a final best-of-seven series to win the championship.  The 2013 Playoffs averaged 17.7 million viewers per game while the Championship Game – Miami Heat vs. San Antonio Spurs captivated 26.3 million viewers. [Source: NBA.com]

Strictly looking at the numbers, the NBA is the winner but you can’t put numbers to a fans passion for their team so we want to know what you think.  Comment below or use #FAN @ticketsdotcom and tell us, which do you prefer: March Madness or the NBA Playoffs?